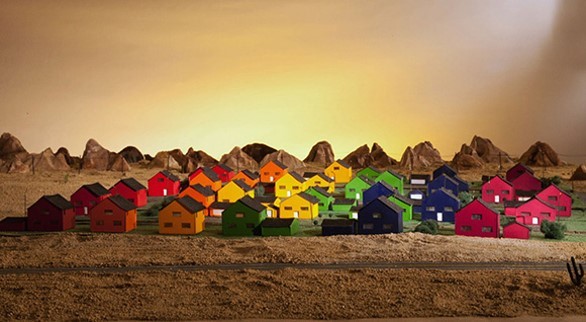 Sille Storihle makes experimental videos and documentaries that consider ideologically loaded historical narratives in relation to questions of citizenship, gender and sexuality. The video The Stonewall Nation is a re-enactment of an interview with gay activist Don Jackson, as performed by actor Michael Kearns. After reading Carl Wittman’s gay manifesto, Jackson aimed to establish a separatist gay community in Alpine County, California, in 1970. As the county only had 367 registered voters, Jackson imagined that if he could get 368 members of the gay community to move there then they would have a political majority, and hope the existing residents would move out. Jackson envisioned a "a gay government, a gay civil service... the world's first gay university, partially paid for by the state... the world's first museum of gay arts, sciences and history... [and a] free county health service and hospital...". Yet, the it ultimately never came to fruition due to local opposition as well as support from the LGBT community not gain enough traction. Storihle questions the ideological reasoning behind this movement, on the one hand unpacking the desire for a communitarian promised-land allowing sexual freedom, yet on the other seeing it as an identitarian and settler-colonialist vision for forcing through an exclusively gay colony. The Stonewall Nation is part of Storihle’s wider project ONE MAN SHOW, which draws from archival material from the ONE National Gay & Lesbian Archives in California. The artist examines the politics of archival documents, attempting to exhaust the focus on the gay white male as the central figure of queer history.