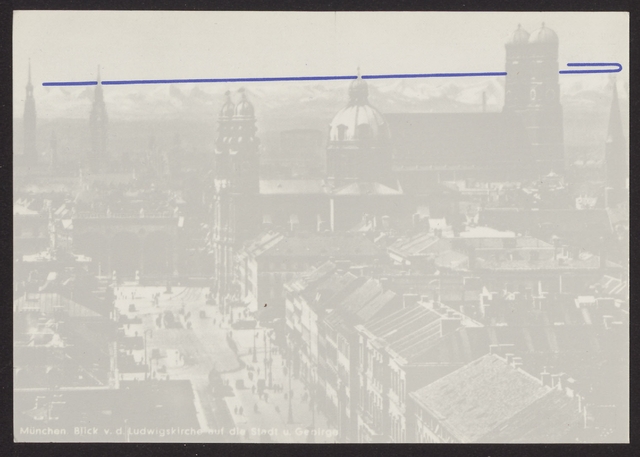 The term Eurasia refers to the super-continent, that includes the landmasses of Europe and Asia. Eurasia held an important place for Beuys as a complex philosophical and cultural concept, which he used to problematise the artificial separation between ‘East’ and ‘West’. Eurasia, in Beuys’ conception, was an open space without physical or ideological boundaries, and possessing a great plurality of culture. Sitting in contrast to the modernist construct of nations states, Eurasia is a space of free movement and the exchange of ideas since ancient times. Anyone who lived on the landmass would be a Eurasian, whether a person is a Fleming, Rheinlander, Mongol, Tartar, Desi, or from any other cultural group. The concept was also a way for him to look away from America as a dominant force of modernity and hegemony. The staff we see in the title of this postcard edition, seen here floating above Munich, refers to the one used by Beuys in his performance Eurasienstab, made together with Henning Christiansen in Antwerp at Wide White Space on 9 February 1968.