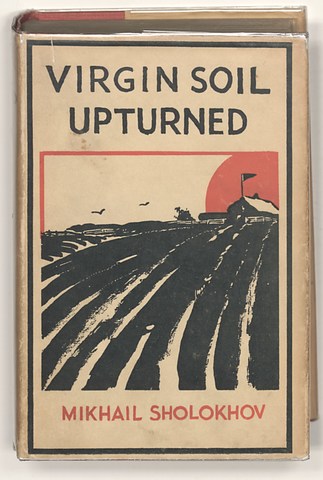 Virgin Soil Upturned, first published in Russian (as Поднятая целина) in 1932, is the first celebrated Socialist realist novel by Mikhail Sholokhov (1905-1984), a Soviet novelist and the winner of the 1965 Nobel Prize for Literature. The plot unfolds through the story of the massive collectivisation of agriculture and the establishment of collective farming in the villages and in the minds of peasants. Through the lives of his characters, Sholokhov tells the story of one of the most arduous periods and controversial policies in the history of the Soviet regime. Shortly after the publication of the book, the major famine of winter 1932-1933 took place as a result of forced collectivisation, and caused millions of deaths. In 1959, Sholokhov would publish a sequel to the novel, describing the dramatic consequences and the terror of the past. ‘Collectivisation’ was the policy of abolishing individual peasant landholdings through their integration into collective and state-controlled farms, carried out in the USSR from 1928 to 1937. The aim was to transform small private farms into large public cooperative production to simplify the system of harvesting agricultural products. It was expected that such measures would immediately increase the food supply for the growing urban population and provide the means for processing industrial and agricultural exports.