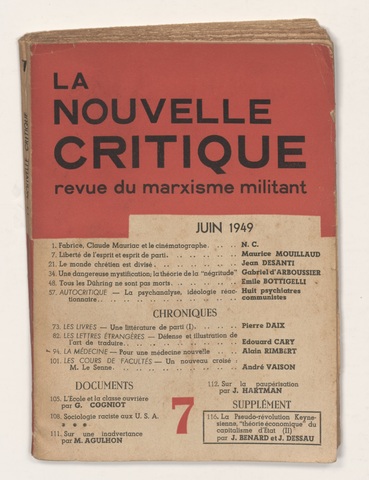 The article by Gabriel d'Arboussier, a French-Senegalese politician, is a critical response to the Anthologie de la nouvelle poésie nègre et malgache de langue française (1948), edited by Senghor and prefaced by Sartre. It reveals the discrepancy between the understanding of black people’s struggle for emancipation by the theorists of Négritude and that of communists. D'Arboussier aims his criticism both at Sartre’s existentialism and at Senghor’s “mysticism”, arguing that the “myth of Black Orpheus detaches negro poetry from social reality” and would “lead to instil in people of colour, by an odious demagogic flattery a harmful isolationist feeling”. And whilst it is the universality of class struggle, the fight against imperialism and building of socialist society, which is considered to be the most important, Négritude is denounced as a reactionary movement for its “particularism”. The arguments of d'Arbousier created the basis of all the following criticism of the movement.