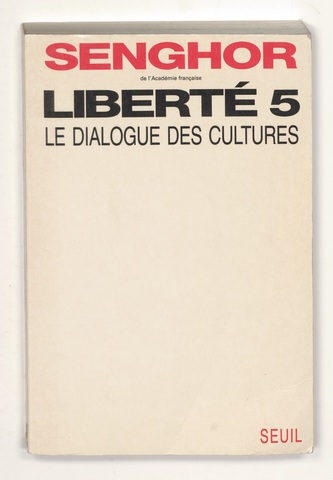 In the article titled Ce que l’homme noir apporte (‘What the Black Man Contributes’), published in Liberté I, Senghor famously stated: “emotion is negro, like the reason is Hellenic”. The final volume of the series reveals a much more complex understanding of this dichotomy, as well as relations between Mediterranean culture and Négritude. In his text Grèce antique et Négritude (Ancient Greece and Négritude) Senghor asserts that there is up to 20 percent of black blood amongst Mediterranean people. Referring to prehistoric times, and in particular to numerous archaeological and ethnological discoveries made in the twentieth century. He argues that Greek civilisation, and the so-called “Greek miracle”, was a result of biological-, and more importantly, cultural métissage. Thus, Senghor’s understanding of the dichotomy of emotion and reason follows that of Nietzsche and his concepts of the Dionysian and the Apollonian as two opposing, but equally important,creative forces. The direct reference to the Nietzschean claim to the return of the symbiosis between the Apollonian and Dionysian spirits can also be found in the central text of this volume that gave name to the whole volume – Le Dialogue des cultures (‘The Dialogue of Cultures’). Senghor understood the values of Négritude as a cornerstone in attaining the balance needed for building a Universal Civilisation, which would be the common goal for all races.