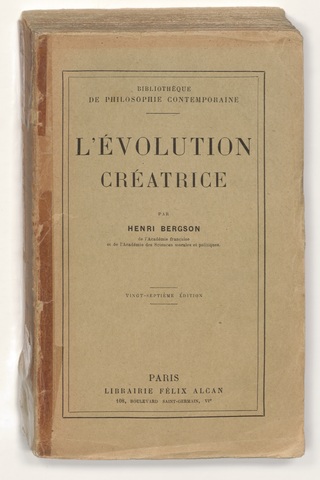 Henri Bergson (1859-1941) was a French philosopher who opposed the prevailing Western rationalism. Bergson was particularly influential for the rehabilitation of intuition in philosophical thought, as well as for his distinction between "open society" and "closed society" (The Two Sources of Morality and Religion, 1932), the ideas which were further developed by Karl Popper. In L’Évolution créatrice Bergson proceeds from evolution as a scientifically established fact, but rejects finalism and introduces the theory of evolution not as mechanistic, but as a creative process, driven by an élan vital (vital impulse). The latter is characterised as an immanent creative impetus found in all organisms and also accounts for the creative nature of mankind. Bergson believed that intuition, as the opposite to practical and rationalised intelligence, allows us to grasp the essence of life and to return to our core creative impulse. These ideas were of particular influence to Léopold Senghor who would later put the primacy of intuition and art at the heart of his philosophy of Négritude.