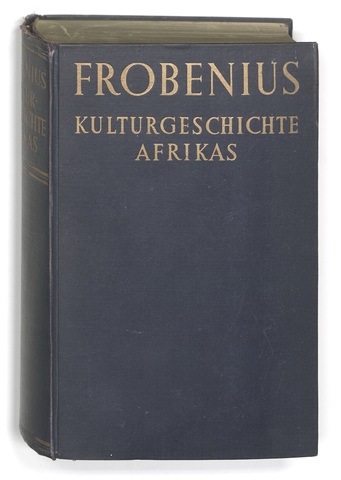 Leo Frobenius (1873-1938) was a German ethnologist, archaeologist, and proponent of a culture-historical approach to ethnology. He is also considered to be one of the key figures that influenced the Négritude movement. In the introduction to An Anthology published on the occasion of Frobenius’ hundred years anniversary, Léopold Senghor claimed that the latter had not only “revealed Africa for the rest of the world”, but also “Africans to themselves”. Indeed, in his Kulturgeschichte Afrikas, the German ethnologist not only points out that the “barbarian negro was a European invention”, but also elaborates on such concepts as emotion, intuition, art, myth, and Eurafrica, which would become crucial for Senghor’s understanding of black subjectivity. Frobenius defined several Kulturkreisen (culture circles), cultural entities that have a particular centre of origin that were later spread around the world. By Eurafrica he understood a civilisation that developed around the Mediterranean Sea, and which flourished in the Upper Palaeolithic and late Stone age. Further developed by Senghor, the concept of Eurafrica was closely connected with his concept of Civilisation de l’Universel (Universal Civilisation) that re-evaluated African cultural achievements, putting them on the same level as European ones, and considering them as part of the same cultural continuum.