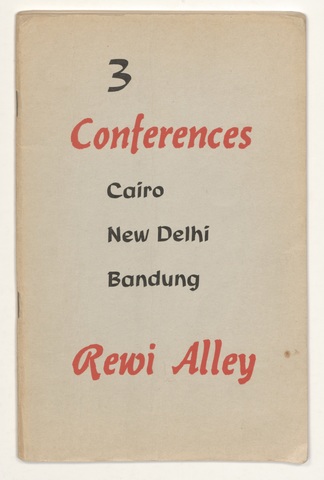 Rewi Alley (1897–1987) was a New Zealand-born writer and political activist, known for his contributions as an educator and internationalist in China. Unlike most 'friends' of the Communist Party of China, Alley had little trouble travelling around the world. He was not only able to keep his New Zealand passport, but was offered honours for his community service in the 1985 New Year Honours. The book is a brief and poetic account of Alley’s journeys to Cairo, followed by New Delhi to attend the World Peace Council Meeting in 1961, and then later to attend the Afro-Asian Conference at Bandung in April 1961 (not to beconfused with the first Bandung conference of 1955). Besides information on the meetings and his keen observations on the way of life in the countries that had recently thrown off the yoke of colonisation, it includes the speeches delivered by Alley on behalf of the New Zealand and Asian and Pacific Liaison Committee for Peace, as well as the poems by the author, inspired by these events.