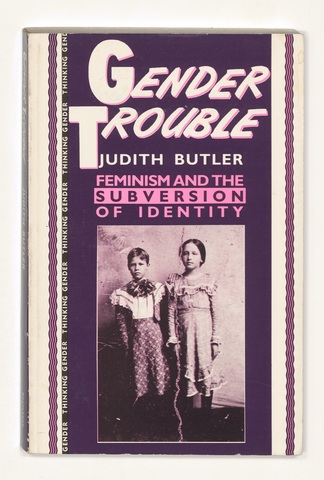 American philosopher Judith Butler wrote Gender Trouble, her first book, in 1990 out of a critical commitment to feminism, and in recognition of the struggles of people that fall outside of prevailing gender norms. The book opens with Simone de Beauvoir's famous line from The Second Sex (1949), "One is not born, but rather becomes, a woman." Butler starts from a look at gender as a social construction resulting from biological sex – a common approach in feminism from the 1970s onwards. She reverses this line of reasoning by advancing gender as a regulating factor of identity that determines the way in which sex is constructed as a natural, binary division into women and men. A second reversal in Gender Trouble relates to what Butler describes as the 'heterosexual matrix' we live in. Heterosexuality is not a natural given arising from the existence of two sexes, but an ordering framework that maintains the normative notions of masculinity and femininity. Butler introduces the notion of 'performativity', borrowed from linguistics to explain how our view of the world is guided by the way we speak about it. She applies this to the construction of gender, proposing that gender comes into being through repeated speaking and acting as a woman or a man. In 'performing' a gender, we constantly reshape the norms of that gender that are passed down. For Butler, working in language presents an opportunity to deviate from current standards and, in doing so, to gradually shift meanings and realise social change.