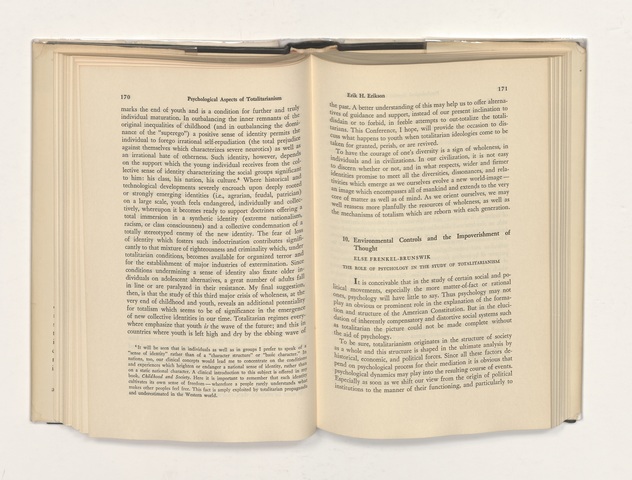 Else Frenkel-Brunswik, "Environmental Controls and the Impoverishment of Thought", 1954

In March 1953, an important conference on totalitarianism was held at the American Academy of Arts and Sciences in Boston. Forty thinkers from different countries participated, including Hannah Arendt and Else Frenkel-Brunswik. The conference aimed to investigate the nature, origin, strengths and weaknesses of modern totalitarian dictatorships. The participants communicated different – sometimes completely diametrical – opinions, and controversy was not shunned. An important discussion, in which also the editor of the conference proceedings, Carl J. Friedrich, participated, was the question of whether modern totalitarianism could be equated with older forms of tyranny – or should rather be treated as historically unique. In 'Environmental Controls and the Impoverishment of Thought', Frenkel-Brunswik takes a closer look at anti-intellectual tendencies and the attitude towards science in Nazi Germany and the Soviet Union.