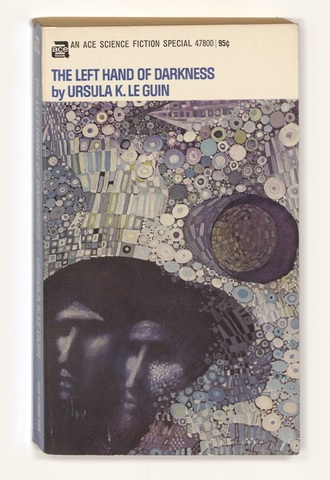 American author and daughter of Theodora Kroeber Ursula Le Guin (1929-2018) is best known for her science fiction books from the late 1960s onwards, in which she questions the conventions of the genre, by creating characters and societies that challenge our understanding of gender, race and political organisation. The Left Hand of Darkness from 1969 is the starting point of a thought process that runs through Le Guin's oeuvre: rethinking and redefining gender and sex. At the novel's centre, we find an androgynous group of people who are both female and male, and who can simultaneously be biological mother and father. Although the book has been described as feminist science fiction and has often been discussed in gender studies, it has also been criticised for the use of the pronoun 'he' to refer to its androgynous characters.

In response to this criticism, Le Guin wrote the essay 'Is Gender Necessary?' in 1976, in which she reflects on her experiment with portraying gender in the book, and examines her own evolving thinking on this subject.

“If we were socially ambisexual, if men and women were completely and genuinely equal in their social roles, equal legally and economically, equal in freedom, in responsibility, and in self-esteem, then society would be a very different thing. What our problems might be, God knows; I only know we would have them. But it seems likely that our central problem would not be the one it is now: the problem of exploitation – exploitation of the woman, of the weak, of the earth.”

The Lathe of Heaven, whose title is a quote from the Chinese poet and Taoist philosopher Zhuangzi (4th century BC), is about a character whose dreams change the past and the present. This anti-utopia is Le Guin's critique of behaviourism, utilitarianism and eugenics. In addition to being an escape from bitter, inhuman democracies and fascist regimes, the book The Dispossessed, An Ambiguous Utopia is an investigation into the dilemmas of an anarcho-socialist utopia. Finally, in The Word for World is Forest, Le Guin links an anti-colonial and anti-militaristic message to environmental issues and the question of the relationship between language and culture.