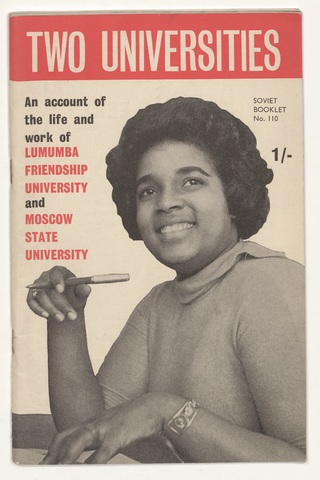 Two Universities. An Account of the Life and Work of Lumumba Friendship University and Moscow State University, 1963

This booklet provides an account of two Moscow universities. While the history of the Moscow State University traces back to the eighteenth century, the Peoples’ Friendship University was founded in 1960 and later renamed after Patrice Lumumba following the assassination of the Congolese independence leader in 1961. The history and the success of one of the most significant ventures in international higher education during the Cold War remains controversial. The University was praised for its educational accomplishments and was considered as an epitome of solidarity and internationalism by its proponents, and denounced as a communist institution for spy recruitment by its opponents, despite the fact that courses in Marxism-Leninism were optional. The very concept of a university established especially to provide education for students from 'Third World' countries was also questioned by the very governments of the countries it was aimed at. The reactions either condemned the concept for its segregationist approach (no Soviet students attended), or to the contrary, commended for the mixture of its student body, revealing some cultural and racial hierarchies, which existed between the so-called 'Third World' countries.