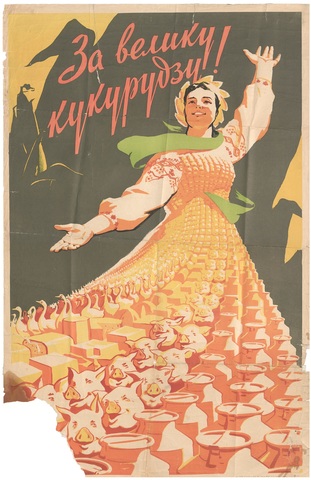 The Corn Campaign was the mass introduction of corn into the agriculture of the USSR in the 1950s and 1960s as a solution to the problem of feeding livestock. The idea of introducing the foreign crop came to Nikita Khrushchev, then the head of the USSR, in 1955 when he met the American farmer Roswell Garst, who told him about the role of corn in US agriculture and its advantages. Shortly after Khrushchev’s trip to the United States, American seed corn was imported to the USSR. The Ministry of Agriculture established a corn research institute in the Ukraine, issued a new scientific journal dedicated to the crop, and launched one of the largest propaganda campaigns in the history of the USSR. Endless slogans in newspapers praised “the queen of the fields”, and through poems, songs, posters, souvenirs, and even a full length animated film titled Чудесница (Chudesnitsa), the government sought every opportunity to popularise the fodder crop. Mass propagation of corn did not take into account the climate of the country, nor the agricultural traditions. In the early 1960s, a quarter of arable land was occupied by corn, which led to a shortage of wheat by autumn 1962. The inevitable failure of monocultural corn farming led to agricultural crisis and the subsequent failure of Khrushchev’s political career.