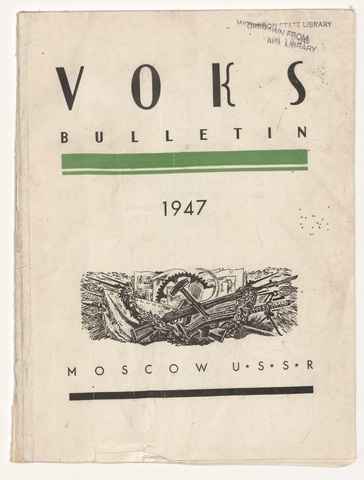 VOKS Bulletin was an English-language cultural magazine published in Moscow by the USSR Society for Cultural Relations with Foreign Countries, an international organisation with parallel national branches around the world. This issue of the magazine includes an article by the magazine’s chief editor, Soviet art critic and prominent party member Vladimir Kemenev. The article titled Aspects of Two Cultures is primarily a typical example of art criticism in the USSR. Opening with several quotations and references to Karl Marx’s writings, he argues that the hostility and anti-democratic nature of the capitalist system will lead to the inevitable decline of modern bourgeois culture. Underlining the close ties between anti-humanism and anti-realism, Kemenev sets the art of Socialist Realism against decadent Western art. Although he also provides an analysis of European modernism to support his ideas, it is obvious that the main criticism was aimed at Americans as the main promoters of "dehumanised" art. The article received the attention of Clement Greenberg, the renowned proponent of Abstract Expressionism, who in turn sharply criticised it in his text for Partisan Review (Greenberg C. ‘Irrelevance versus Irresponsibility’. Partisan Review. 1948. Vol. 15. no. 5. Pp. 573-579).This polemic between two critics is an early example of controversies over figurative and abstract art, which would become the main subject of the Cold War in the cultural field. The onset of the Cold War also shifted the policy of Partisan Review. Known as the main publisher of Greenberg’s writings, this magazine (along with many other cultural institutions) received funding from CIA (Central Intelligence Agency) during the 1950s-60s.