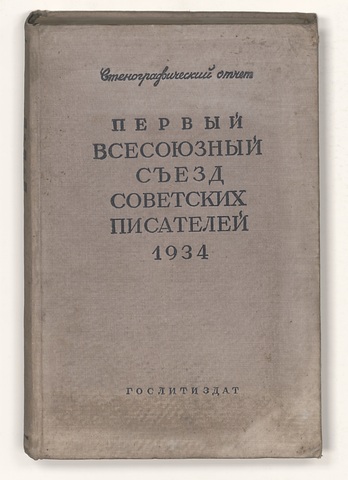 Verbatim Record of the Speeches at the First All-Union Congress of Soviet Writers, 1934

The First All-Union Congress of Soviet Writers, held in Moscow from August 17 to September 1, 1934, was a turning point in Soviet history. It was during this congress that the doctrine of the single creative method – Socialist Realism – was introduced. The congress was the next step in the Soviet policy of restricting artistic freedom, after the Central Committee of the Communist Party of the Soviet Union had adopted the decree titled 'On the Restructuring of Literary and Artistic Organisations' in 1932. All modernistic experiments would be systematically condemned as “bourgeois formalism”, whilst the Socialist Realist method was defined as a “truthful and historically specific depiction of reality in its revolutionary development”, and was considered universal for all kinds of arts. However, it is significant that in a historically literature-centric society, the establishment of the Socialist Realist monoculture was entrusted to writers who were proclaimed “the engineers of the human soul”. According to the given definition, Socialist Realist literature was supposed not simply to depict reality, but construct one. More than 500 delegates attended the Congress, half of them became victims of Stalinist purges in the following years.