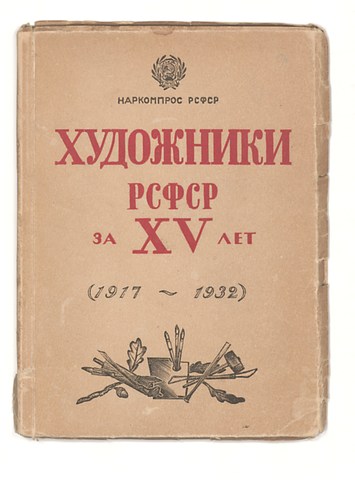 The exhibition titled 15 years of Artists of the RSFSR (Russian Soviet Federative Socialist Republic) was first conceived in January 1932 in Leningrad at the State Russian Museum to coincide with the 15th anniversary of the revolution. A year later it travelled to the halls of the Historical Museum in Moscow. While the Leningrad exhibition looked like a major survey of the wide range of artistic practices of the past years, presenting the new realist art alongside Russian avant-garde art, the Moscow exhibition could be considered as a milestone in the history of the homogenisation of Soviet artistic culture. The list of participants of the exhibition in Moscow underwent considerable changes, with “formalist” movements being omitted or limited to a few examples. The role of those few examples of avant-garde art was to illustrate the degenerative line in arts. As stated in the introduction to the catalogue, the main positive conclusions derived from the artistic survey were “the gradual, but determined elimination of any formalistic tendencies” in art and its replacement with Socialist Realism.The unambiguous effect of such representation was evident. Soon after the closure of the exhibition, the avant-garde artworks were hidden in storage, whilst Socialist Realism became the single 'creative mode' visible to artists for the following decades.