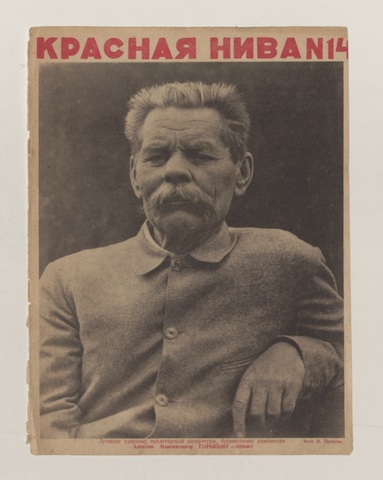 Maxim Gorky (1868-1936) was a Russian and Soviet writer regarded as the father of Socialist Realism, and was the head of The First All-Union Congress of Soviet Writers. His speech for the congress was full of strong criticism against modernist literature and art. The period from 1907 to 1917, (the period of flourishing avant-garde art and literature in Russia), was condemned by Gorky “as the most shameful and shameless decade in the history of the Russian intelligentsia”, the time of “irresponsible ideas” and complete “freedom of creation”. Such liberty, according to Gorky, “found its expression in propaganda of all the conservative ideas of the Western bourgeoisie”. For a significant part of his life, the writer was exiled from Russia and later the Soviet Union. He returned to the USSR in 1932 on Joseph Stalin's personal invitation. Shortly after his death, the complexities in Gorky's writing, his political and artistic views were reduced to an unambiguous iconic image: Gorky as a great Soviet writer of common descent and the founder and fierce supporter of the increasingly canonical Socialist Realism.