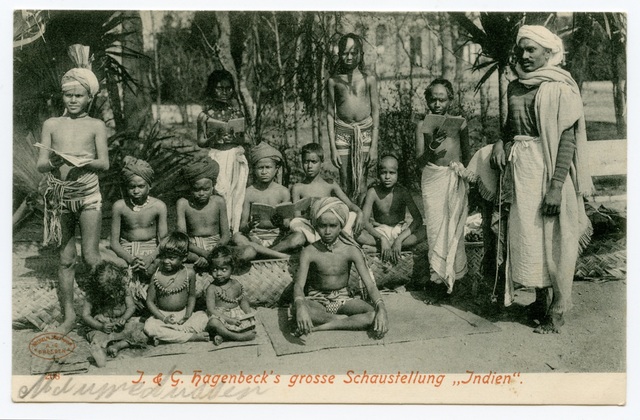 Facilitated by the two emerging scientific disciplines of ethnology and anthropology, ‘ethnological exhibitions’, also referred to as human zoos, emerged in the late 19th century, operating as the most significant events for propagating imperialism. Introduced in Europe by Carl Hagenbeck, a German merchant of wild animals, they were a spectacle of ‘exotic’ indigenous peoples from the distant territories of Africa, the Arctic, India, Ceylon and Southeast Asia, typically housed within the constructed setting of a native village. Hagenbeck’s exhibitions in the Tierpark, Hamburg-Stellingen, were chosen as the reference for subsequent human zoos within the framework of colonial exhibitions. Organised to boost trade, they also displayed a range of ethnographical material accompanied by individuals originating from colonies. Perhaps the most visited and notable colonial exhibitions were those held in Paris in the tropical garden of the Bois de Vincennes and the Jardin d'Acclimatation. Despite enormous interest from the general public and the millions of visitors attending the exhibitions, there was a certain rise in social consciousness – thus, there was a call to boycott the 1931 Paris Colonial Exhibition supported by famous Surrealist artists and members of the French communist party.

Human zoos were also part of the colonial sections of Belgian International Exhibitions from the end of the 19th until the mid-20th centuries. One of the most remarkable events was the 1897 Tervuren Exhibition, which displayed the products and people of the Congo Independent State, which was in the personal possession of King Leopold II until 1908. A lavishly illustrated guide book in the style of Art Nouveau provided an insight into the grandeur of the exposition that took place in the newly built Palais des Colonies and its gardens, where scenes of everyday African life attracted thousands of visitors. Besides being major propaganda for the economic potential of Belgian presence in the Congo, it also emphasised the ‘civilising’ work of Belgian missions. Colonial exhibitions contributed the most to the creation of the image of the inferior savage Other, and the legitimatisation of colonialism.