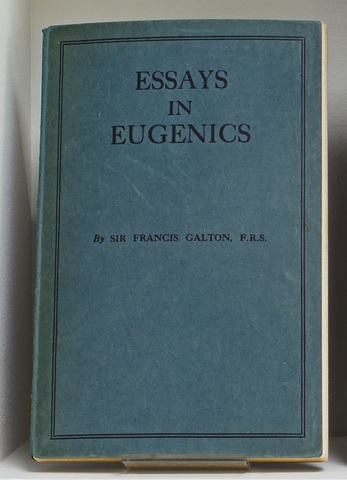 Sir Francis Galton (1822-1911) was an English psychometrist, geneticist, and the father of the eugenics movement. He introduced the very term eugenics and laid the foundations for a movement that would develop in the following decades. Inspired by the theory of evolution by natural selection introduced by his half-cousin, Charles Darwin, he dedicated his studies to the improvement of the human race. Galton was convinced that eugenics studies could replace Darwinian ‘natural selection’ with more effective processes. The book is one of the early publications by The Eugenics Education Society founded in Great Britain in 1907, where Galton would serve as the society's first president. Essays in Eugenics is a chronological collection of lectures and texts (written between 1901 and 1908) in which Galton sets out his views on the methods and objectives of eugenics. The book testifies to Galton’s strong belief in heredity of social and mental traits. He also promoted further exploration of the inherited differences between social classes, advocated marriage restrictions and potential segregation of 'the unfit' as a means to prevent 'the degeneration of genetic potential', and pays much attention to the popularisation of eugenics and its potential to take over the role of religion.

“The practice of Eugenics has already obtained a considerable hold on popular estimation, and is steadily acquiring the status of a practical question, and not that of a mere vision of Utopia.”