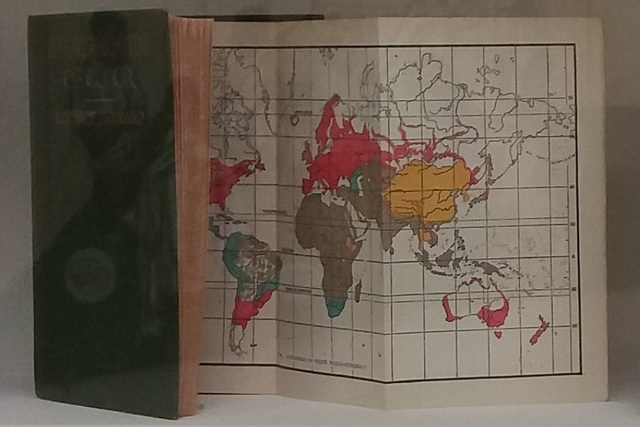 Lothrop Stoddard, "The Rising Tide of Color Against White-World Supremacy", 1920

Theodore Lothrop Stoddard (1883-1950) was an American historian, a member of the Ku Klux Klan, and author of several books which advocated eugenics and scientific racism. It is believed that it was one of his books, titled Untermensch (Sub-human), 1922, which introduced this term into Nazi conceptions of race. Opening with an introduction by another noted white supremacist, Madison Grant, the book describes the World of colour formed by Yellow, Brown, Black and Red Man’s lands and claims the absorption and elimination of the white race and the destruction of Western civilisation. Stoddard, who was highly concerned with rising nationalism in colonised nations, sees the emergence of Pan-Islamism and Pan-Africanism as the main threats. Another great peril was represented by Bolshevism and its main tenets – the dictatorship of the proletariat and the destruction of the classes.

According to Grant, bolshevism, being both anti-racial and anti-social, reveals itself as “the arch-enemy of civilisation and the race”. Like, many works on eugenics, the book advocates restricting non-white migration into white nations and separation of the "primary races" of the world. However, it’s the fear of the fall of colonialism, rising popularisation of Islam, concerns about fast industrialisation in China and Japan, and the strong anti-communist spirit that make the book particularly influential.The book is referenced in F. Scott Fitzgerald's novel The Great Gatsby (1925), in which antagonist Tom Buchanan praises a book titled The Rise of the Colored Empires written by an author named Goddard. His strategy to frighten readers with the spectre of a race war, by presenting the enemies of the 'white race' as being strong enough to pose an existential threat, but weak enough to defeat, is still being practiced, some hundred years later, by white supremacists. And a map showing the 'Distribution of the White Races', featured in the book,can be purchased as a decorative item at US hypermarket chain Walmart.

“The grim truth of the matter is this: The whole white race is exposed, immediately or ultimately, to the possibility of social sterilisation and final replacement or absorption by the teeming colored races”.