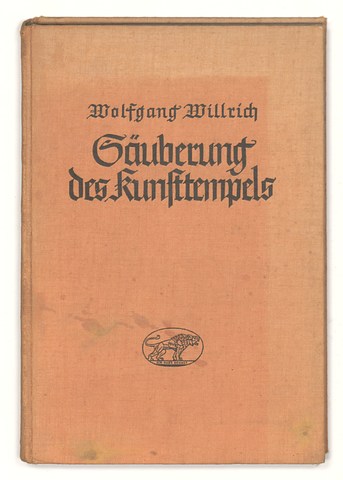 Wolfgang Willrich (1897-1948) was a German artist, writer and one of the organisers of the Entartete Kunst exhibition. In the 1930s, he worked briefly at the Ministry of Culture under Nazi rule. His portraits of Aryan men, women and children were distributed by the Nazi party in the form of posters and postcards, he also contributed his paintings to the Great German Art Exhibitions. In his book, which was a major inspiration for Nazi Minister of Propaganda Joseph Goebbels, Willrich gives a negative overview of modern art in Germany, viciously attacking such prominent modernist artists as Barlach, Dix, Grosz, Heckel, Nolde, Schmidt-Rottluff and others whose work fell victim to subsequent confiscation and elimination. The book opens with a quote from Hitler’s Mein Kampf and a foreword in which Willrich proclaims the cleansing of the art temple to be an important duty, which not only concerns aesthetic preferences, but rather, the issues of mental health. According to the author, the 'Temple of Art' should be reserved for art promoting the wellbeing of the Nazi 'Volksgemeinschaft' (People's Community). Even in Nazi circles, Willrich's views were perceived as (too) radical.