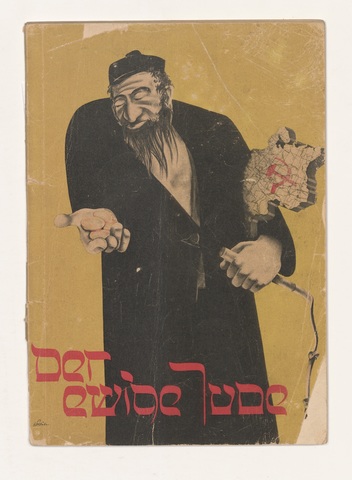 The propagandistic exhibition, conceived to travel, first opened at the Bibliotheksbau des Deutschen Museums (Library of the German Museum) in Munich in 1937. It is regarded as one of the key examples in the series of 'shaming exhibitions', which began in 1937 with Antibolschewistische Ausstellung (Anti-Bolshevik Exhibition), followed by the Entartete Kunst exhibition and continued with the exhibition Der Ewige Jude (The Eternal Jew). It was also the largest pre-war anti-Semitic exhibition, which was intended to represent a supposed Jewish attempt at bolshevising Nazi Germany. The cover of the catalogue features the exhibition poster that presented an 'Eastern' Jew wearing a kaftan, holding gold coins in one hand and a whip in the other, with a map with the communist symbol – the hammer and sickle – under his arm. The exhibition was shown later in Vienna, Berlin, Dresden and other cities, and reportedly provoked the rise of anti-Semitism in the cities where the exhibition was held.