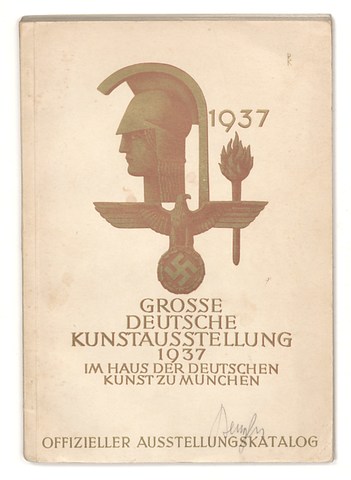 The Great German Art Exhibition took place eight times from 1937 to 1944 at the Haus der Deutschen Kunst (House of German Art) in Munich, a monumental neoclassical building, which had been constructed especially for this purpose.The exhibition was propagated a sthe most important cultural event in Nazi Germany and the main representative of art under National Socialism. The first exhibition opened just a day before the Entartete kunst exhibition, so that 'degenerate art' and the art promoted by the regime, the so-called 'German art', would be intentionally juxtaposed. In his opening speech on July 18, 1937, Hitler gave a comprehensive presentation of the National Socialist understanding of 'German art', defining the new German art stylistically and ideologically with the words: "To be German means to be clear". (“Deutsch sein, heißt klar sein”), which was implied to be “logical” and above all true.