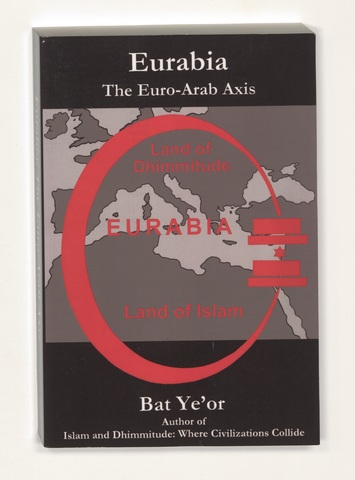 Bat Ye' or (Hebrew for 'daughter of the Nile') is the pseudonym of Giselle Littman, a British author of Jewish-Egyptian descent. She presents herself as a historian but lacks any such official qualification. In Eurabia: The Euro-Arab Axis, she introduces the concept of ‘Eurabia’, referring to a Europe that is Islamised and that eventually will be completely absorbed by the Arab world. The starting point of Bat Ye'or's conspiracy theory is a historical one: she cites a number of agreements that took place between leaders of European and Arab countries in the 1970s and the creation of the Euro-Arab Dialogue. Bat Ye'or claims that during the Copenhagen European Summit of December 1973, where the 'dialogue' was supposedly launched, the Arab contingent agreed to ensure the supply of oil to Europe in exchange for allowing migration, in order to Islamise Europe. She states:

“The three most apparent symptoms of this fundamental change in European policy are officially sponsored anti-Americanism, antisemitism and anti-Zionism and 'Palestinianism'. These increasingly visible aspects of European policy are merely components of an overall vision for the transformation of Europe into a new geopolitical entity – Eurabia ”.

In Europe, Bat Ye'or's conspiracy theory and her concept of Eurabia are mainly adopted by politicians from extreme right-wing parties, who use them in their Islamophobic anti-immigration discourse. In 2007, Bat Ye'or and her husband David Littman, an Israeli lobbyist at the United Nations, were keynote speakers at the CounterJihad event, organised in the buildings of the European Parliament in Brussels by Flemish nationalist and extreme-right party Vlaams Belang. CounterJihad is an international, loose political movement of authors, bloggers, think tanks and pressure groups that do not consider Islam a religion but rather an existential threat to the ‘West'.