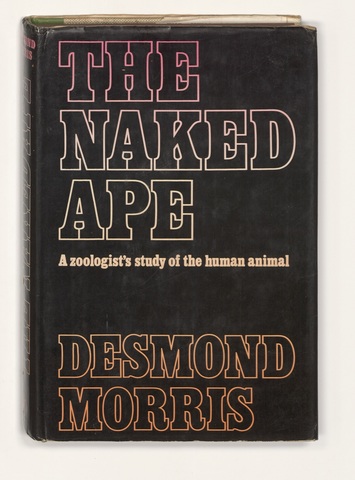 Desmond Morris, "The Naked Ape: A Zoologist's Study of the Human Animal", 1967

In October 1967, British zoologist and behavioural scientist Desmond Morris (1928) published his infamous book The Naked Ape: A Zoologist's Study of the Human Animal, a study of human behaviour, in which he approached man as one of the 193 monkey species. According to Morris, human behaviour and its evolution can best be understood as animal behaviour. Man does have some specific peculiarities. He does not only have the biggest brain and the largest penis, but is also the only monkey species whose body isn't covered with hair. This evolution toward a 'naked monkey' helped couples live monogamously, so that male specimens could hunt with confidence, while the females waited faithfully for them at home. In his theory, only the hunting men are the driving force behind the evolution of human intelligence. Ever since the publication of the book, Morris has received strong criticism from feminists and (especially female) scientists. In the sequel The Human Zoo, Morris examines urban societies. He compares life in a city with life in a zoo: both provide the inhabitants with all the necessities of life, but with withdrawal from a natural environment. Isolation, boredom and life in a restricted space make the development of healthy social relationships difficult, which can lead to all kinds of violence.