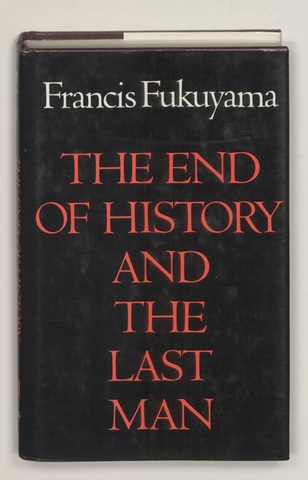 Francis Fukuyama, "The End of History and the Last Man", 1992

"[In this article], I argued that a remarkable consensus concerning the legitimacy of liberal democracy as a system of government had emerged throughout the world over the past few years, as it conquered rival ideologies like hereditary monarchy, fascism, and most recently communism. More than that, however, I argued that liberal democracy may constitute the 'end point of mankind’s ideological evolution' and the 'final form of human government,' and as such constituted the 'end of history'.”

This quote from political scientist and philosopher Francis Fukuyama (1952-) refers to his 1989 article that formed the basis for the book he wrote three years later, which introduce the central thesis of The End of History and the Last Man. Shortly after the fall of the Berlin Wall, Fukuyama proclaims the victory of Western democracy over communism and all other ideologies. Since the 1990s, Fukuyama's triumphalist image has often been adopted by politicians from centrist parties in the West. Fukuyama looks back at the history of the past centuries and sees a continuous clash of ideologies, driven by the logic of modern science on the one hand and the struggle for human recognition on the other. To underpin his reasoning, Fukuyama starts from Immanuel Kant's idea of a universal history; Georg Wilhelm Hegel's notion of the end of history (as interpreted by Alexandre Kojève); and Karl Marx's concept of a history driven by class struggle. On the last pages of the book, Fukuyama uses the metaphor of 'a long wagon train out along a road' to clarify his vision of history. Every wagon is on its way to the same destination, but some are already further than others; some have completely given up on the journey; and the wagons trying out alternative routes discover that they all have to go through the same mountain pass to reach the final goal. Thus, according to Fukuyama, human history is universal, progressive, and going in one direction. He sees an evolution that started under the impulse of the European Enlightenment, and that evolves towards a global monoculture of liberal capitalism.