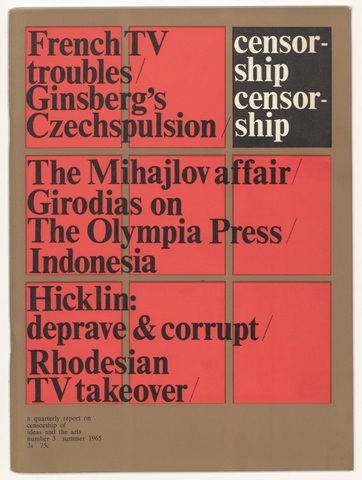 The publications distributed by the CCF were mainly aimed at Western intellectuals and, unlike other kinds of propaganda material, they are generally distinguished by nice design and witticism in their mockery of totalitarian ideology. Such is the introduction to the Extracts from the Soviet Philosophical Dictionary. This tiny brochure, which was probably published as a supplement to French magazine Preuves, includes English translation of the thirteen ludicrous articles from the Short Philosophical Dictionary of the USSR. Similar is the rhetoric of Censorship magazine that was published in London. The first three issues reveal the precedents of censorship and prudish restrictions against the arts in a wide range of European countries, as well as Australia, the USA and Japan. Although publications by the Congress for Cultural Freedom had a distinct anti-communist advocacy, the revelation of CIA funding led to disillusionment and resignations among supporters of the organisation.