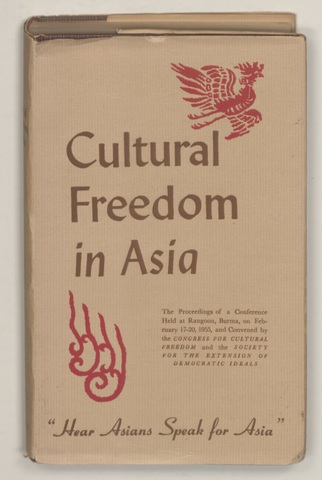 Cultural Freedom in Asia. The proceedings of a conference held at Ragoon, Burma, on February 17-20, 1955, and convened by the Congress for Cultural Freedom and the Society for the Extension of Democratic Ideals, 1956

The founding conference of the CCF in Berlin was followed by the First Asian Conference on Cultural Freedom, held in Bombay in 1951. The propaganda brochures from the conference focus on two subjects: Indian 'neutralism' and advocacy of the American economic model and laisséz-faire capitalism. The fight against neutralism was one the key ideas of the CCF, expressed in the Manifesto issued in Berlin: “We hold that the history and practice of totalitarianism are the greatest threat which humanity has faced in all its recorded history.  We believe that apathy and neutrality toward this threat constitute treason to the essential values of mankind, an abdication of the free spirit. Our answer to this challenge will determine whether mankind shall follow the path to totalitarianism or to freedom”. Neutralism in India, here, is considered a “marked phenomenon” of two aspects: an official governmental position of non-alignment in the Cold war and “the neutralist sentiment”. The first is claimed to be “a subject of statecraft and therefore beyond the scope of the CCF, except insofar as foreign policy inevitably plays it’s part in the moulding of public sentiment”, which is, in its turn, denoted as a primary concern of the CCF.