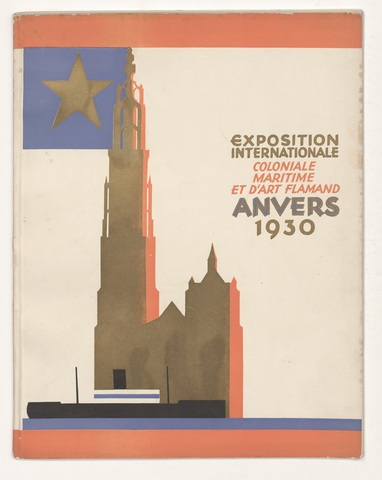 “Antwerp, with its powerful and ever expanding port. Antwerp, whose population was the first to understand and support all of Leopold II's bold colonial plans. Antwerp, whose shipping lines connect our colony to the Motherland...”

Opening speech on 28 April 1930 by Alfred Martougin, Chairman of the Executive Committee of the International Exhibition: Colonial, Maritime and Flemish Art.

In 1930, after 1885 and 1894, Antwerp organised a world exhibition. It would be the third and last time. As 1930 coincided with the celebration of Belgium's centenary, several cities had applied. The government decided to hold the exhibition at two locations simultaneously: Liege and Antwerp. Thematically, a division was made between industry and science in Liege; and trade and colonies in Antwerp. However, the Bureau of International Expositions didn't recognise the double exhibition as a world exposition. For Antwerp, the International Exhibition: Colonial, Maritime and Flemish Art was very important. In addition to city marketing, urban expansion – a fully new city section was created between Berchem and the Scheldt, today called the Tentoonstellingswijk (Exhibition District) – as well as major infrastructure works (including the construction of the Waasland Tunnel), the exhibition looked to turn Antwerp into a metropolis for the future. The city itself built two bridges over the Kielsevest and two exhibition buildings, which were subsequently converted into the Christ the King Church on the one hand, and a school (in the Pestalozzi Street) on the other. In these buildings a retrospective of old Flemish art took place – probably the largest ever held. Unlike in 1885 and 1894, the 1930 exhibition did not feature a Congolese village. However, there was another attraction: visitors were able to view a commercially operated 'negro village'. The colonial government wanted to focus on Belgian achievements in mining and agriculture in Congo; on an extensive collection of sculptures, masks and utensils; and on Catholic missions. The monumental 'Congo Palace', especially built for this purpose, acquired an oriental, 'Eastern' character, because the designers believed that black Africa had no architecture of its own.