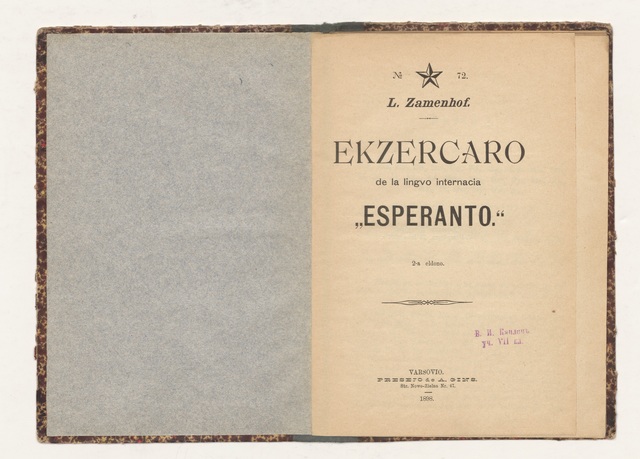 Esperanto is the mostly widely used artificial language in the world. In 1887, Ludwik Zamenhof (1859-1917), the inventor of Esperanto, published a small book in Russian titled Международный язык /Lingvo Internacia (commonly referred to as Unua Libro). Declining the principle of authorship, he modestly signed the book as Dr. Esperanto, meaning “one who hopes”. The hope was to create a language that would promote a peaceful coexistence between people of different cultures. An ophthalmologist of Jewish-Polish origin, Zamenhof was born in Białystok, then part of the Russian Empire. The experience of living in a mixed community of Jews, Orthodox Russians, Protestant Germans and Catholic Poles, where violence between different groups was common, inspired him to construct a language that would make intercultural dialogue possible. Having the idea of a friendly community at its core, Esperanto gained popularity with many Esperantist groups popping up around the world. Despite repression throughout the 20th century by authoritarian regimes, the development of the Esperantist community has continued into the present day.